for brass quartet and ensemble

The piece RUNAROUND is scored for instrumental groups which are dispersed throughout the entire concert hall. Four brass soloists play from the stage, with the percussionist being placed behind them, accompanied by the five more instrumental groups – each consisting of a woodwind and a string player – situated around the audience. The piece could be described as a kind of rhapsody where the soloists are brought into various contexts with the accompanying groups.

At the beginning of the piece the soloists are presented one by one and subsequently combine in short figurations with the groups situated around the audience, creating vortex-like moments. After a brief intermezzo by ensemble, the soloists introduce a section based almost entirely on natural harmonics. Overtone glissandi by brass are performed in various speed ratios, confronted with the imitation of those same structures played in slow motion by the ensemble, which subsequently make a smooth transition to the following section, which is built on pointillistic principles. The four soloists essentially merge into a single four-lipped player, performing a mosaic-like interweaving of multiple staccato lines. Suddenly, the listener is thrown onto a different planet with a dreamlike, fairy tale environment. Out of nowhere, the sounds of the duduk and the shakuhachi emerge. The interaction between the soloists and the ensemble seems transformed into a slowly pulsating atmosphere. That opaque, liquid surface clears as the groups start converging on impulses that swing back and forth like a pendulum, making a transition to the finale. A walking bass heralds an upcoming encounter between the existing and the unexpected. The soloists seem to play jazz on their mouthpieces only, accompanied by harmonic impulses in the instrumental groups. Occasionally, that flow is interrupted by the strings playing fragmentary structures reminiscent of a viennese waltz from the „fin-de-siècle“. A dense climax cuts where suddenly to a soft walking bass, accompanying the buzzing lips of the soloists. Why does the piece end like that?

I once heard the brass quartet of Ensemble Modern recording variations on „Let‘s call this“ arranged by one of their trumpet players, Valentin Garvie. Their improvisational abilities made a great impression on me, and I decided to blend their creative skills with my compositional structures. Over the walking bass, I wrote four lines of rhythmic material for playing on mouthpieces only and drew approximate pitch contours in order to leave room for interpretation to the brass players. The element of walking bass remains active until the end of the piece and varies form the double bass original over the lowest trumpet register to the tutti of low instruments. In order to achieve a pulsating musical form, I decided to interrupt the walking bass flow occasionally. Therefore, I was looking for a contrasting rhythmical element which has a strong historical reference. In one of my previous pieces, I had composed a kind of „broken waltz“, and in RUNAROUND it seemed appropriate for me to insert the waltz gesture in order to break the repetitive rhythmic structure of a walking bass. 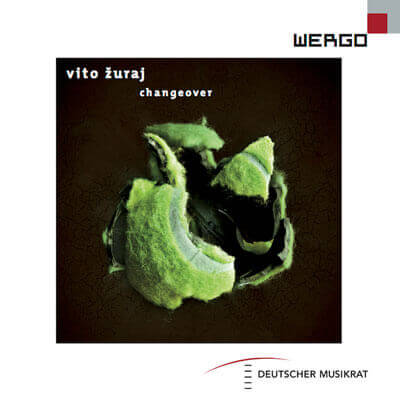